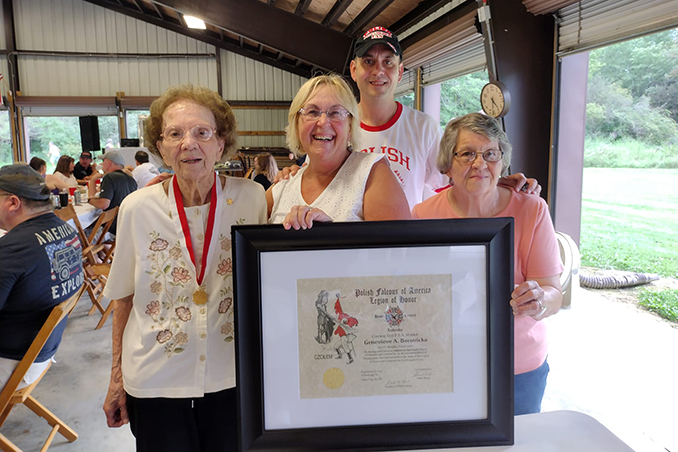 Nest 97, Windber, Pa., hasn’t presented an award since 2007. Recently, two Members were nominated for bronze Stars of Merit – the Nest President, Stan Paczek and one of their Nest Members. When I shared these applications with our President, he decided that one should be elevated to Legion of Honor. After discussion with Grand Master, Ed Ciesla, President Kuzma chose to elevate Genevieve Borovicka to Gold Legion of Honor. Her name should be very familiar to you as I am always (and I do mean always!) asking folks to be a Genevieve. Her grandson, Ken Meier, received a Starzynski Grant back in 1994 (his sister, Kristine received one in in 1999 for $800.00) for $750.00. His Grammy was so pleased that she decided to donate $10 a month, having done so over 325 times!

Druhna just celebrated her 100th birthday! She received over 200 cards, quite a few from many of you! She has been active in the Falcons since the age of 11. (Her Father had been a Member.) Druhna used to march in parades with the Falcons and was involved with the pyramids that the Falcons used to do all the time! Druhna had bowled in the Falcon leagues (both duck pin and ten pin) for over 30 years and participated in numerous District and National Bowling Tournaments. Anytime the Nest was hosting a banquet or party, Druhna helped.

Genevieve and her husband, Joseph, were extremely involved. Druh Joe used to volunteer as a bartender and was also a Nest Officer for decades. They helped the Nest out financially, paying off the mortgage and also paying for oil for the building. In time, the Nest repaid them.

Not only was Druhna elevated to Legion of Honor, but President Tim sent me to the Nest 97 picnic as a surprise to all. Ken was working the picnic and sent me photos, my comment was “am on my way.” He, of course, thought it was a joke. Shortly after, I sent him a message and asked him to call me. His thinking was, why is she bothering me, she knows I am busy at the picnic. FYI, Grammy drove herself to the Nest 97 picnic!!! Gives one hope!

It was wonderful to attend a Nest 97 event as I haven’t been there in years. There were close to 200 people in attendance. It was an extremely warm day but the crowd had a great time. I was truly honored to aid Druh Ken in his presentation of awards. Hopefully, Nest 97 will continue to acknowledge those who work so hard for the Nest (including you, Ken!).